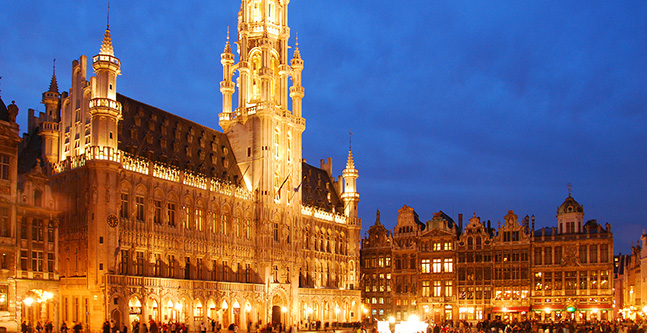 Brussels: rent a car for a pleasant journey

The first impression of the capital of the Kingdom of Belgium – monumentality. The historical heritage in Brussels are careful and attentive, yet the city vending once prosperous European artisans and merchants, is influenced by the times.

The modern look of acquiring business districts and residential areas, as well as the road network, which travel a pleasure. And start his detailed familiarity with Brussels will almost from the first steps at the international airport, where services are available car rental companies.

The administrative center of the European Union are just two airports located 12 km away from Zaventem international airport and 46 km the second largest Charleroi. The first is considered the main gateway of Belgium, and in 2005, according to surveys of passengers, he was recognized as the best in Europe. Everything here – the location of the information boards and navigation services to the service and rest areas – thought out with concern for the comfort of passengers. Just flown tourists and visitors will be easy to find in Level 2, Hall offices of car rental companies.

Of course, better to worry about this, and at least several months before the date of arrival to choose a company to find out details and choose the car, not to worry and to save considerably on service. But for those for whom a trip to Brussels was the spontaneous, almost nothing will prevent rent a car.

At the airport, Zaventem rental services are offered by many companies:

The second air gates of Brussels – Charleroi – after the reorganization in the 90s once again began to take flight, and the construction of a new terminal in 2008 has increased the annual rate of passenger traffic up to 5 million. People. The second largest airport of the Belgian capital is a major European hub with a modern structure where a separate level set aside for offices travel agencies and firms offering various categories of cars for hire.

In Charleroi working offices of such companies as:

In consideration of the application of any company starts with the fact that you will be asked to show a driver's license of international standard. Still need a bank card with a sufficient amount on the account, which will be frozen for a period of signing the contract. The nuances can affect those who are under 25 years of age or has a small driving experience.

If, during a trip to Brussels, the item "car rental" is listed as mandatory, then, going here with children will have to worry about the choice in advance so as not to spend hours waiting for the search of the car with optional equipment.

Insurance – a prerequisite, and often the standard package is included in the rent. In addition to the policy that insures against possible damage to the car, to rent and damages to third parties, there is another option – a complete package with a zero deductible, designed in our company. In any case, the amount of the contribution will remain within reasonable limits, and driver will be spared from unnecessary anxiety.

Choose the car according to the preferences or size will not be much trouble. For the busiest roads of the capital, of course, better to choose a small-size cars. If it is necessary, or a roomy executive car, the rental can take Audi Q5, Mercedes C-Class or BMW 3 Series.

"Golden Gate of Europe", as Brussels is often called – is a well-equipped, modern extensive system of road with a bright night lights. There are standard rules of the road and road signs, as well as throughout Europe. On the roads of the Belgian capital, as a rule, drivers are polite and disciplined, and not least because of the weighty amount of the fine.

Note: in some cases the fines have been significantly and avoid penalties for violating just will not work due to the huge number of surveillance cameras.

Respect speed limits should be impeccable, especially in some parts of the road where the signs are placed with special requirements. For the rest, the same rules as everywhere within the city does not exceed the limit of 50 km / h, and for the city and on the highway, you can race at speeds of 90 and 120 km / h respectively.

Wishes to try their luck should be prepared for the fact that for speeding at 10 km / h will have to pay 50 euros, and each subsequent number on the speedometer, which will exceed the limit, will cost another 5 to 10 euros on top of the minimum amount of the fine.

The easiest way to avoid unnecessary costs – not to break the rules, because even seemingly minor offense as parking in the wrong place, expect to pay a minimum fine of 50 euros. All data about the offense immediately get into the computer database, which eliminates the possibility to avoid punishment.

The graduation of fines for violations of traffic rules in Brussels is as follows:

In the most serious cases can and do lose their rights, and selected police the right to receive back only through the courts with the help of expensive services of a lawyer and not immediately.

Numerous refueling remove sharp questions about filling the car with only a slight nuance. Hours offices in many of them is limited, which causes some difficulties in the interval from 22.00 to 8.00 in the morning. To solve the issue of filling the floor of the rented car will with cash on highways.

On a note! Belgium is authorized to carry fuel in the canister.

The cost of any type of fuel is the same across the country, so there is no point in looking for additional benefits.

Regarding parking: optimally – it is paid parking or underground parking. Let these options and not quite cheap, but give peace of mind. On their territory is under constant surveillance, so the car will be under guard.

Road traffic in Brussels to help relieve the parking area:

As a rule, a special drive is already in a rented car: look in the glove compartment and take out there that resembles a clock. Now is the time to install and secure parking disc on the windscreen, before going about their business.