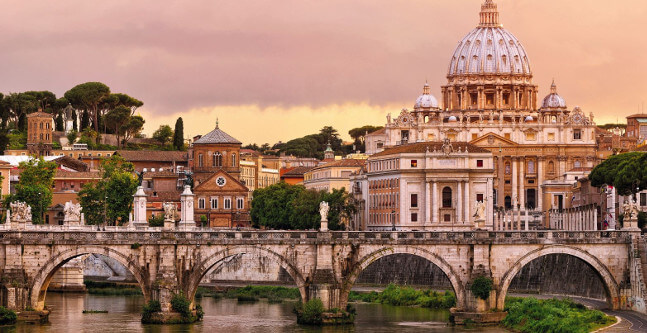 Rent a car in Rome

Rent a car in Rome – the Eternal city

There is useful advice on car rental in the capital of Italy. Please, remember that the road traffic regulations in Italy and in Rome in particular are very strict and try not violating them.

Rome is a tourist destination for many travelers who come to Italy and even for those who come to Europe from other continents. Rome is a city which dazzles people with its history and architecture, shines with antiquity and allows disregarding existing problems. It is really worth spending your holidays in Rome.

There are two airports in Rome where you can hire a car.

This is the main air gate for international travelers. This airport is located just 28 kilometers away from the city. This is a very large airport and moving around it can be stressful. A good idea is renting a car right at the airport. There is also another perfect variant. You can reach the Termini railway station and hire a car there. The trains go every half an hour. The first train leaves at 6:37 and the last one leaves at 23:37. The ticket costs 9.5 Euro. Companies which offer car rental at the Fiumicino airport are located at terminals A, B and C.

This airport accepts internal and charter flights. It is a little bit smaller than Fiumicino-Leonardo da Vinci. However, it also has offices of car rental companies. All large European car rental agencies have their branches at Ciampino. The conditions are standard and the choice of cars is perfect. You can also easily reach the Termini railway station from this airport. This will take you just 20 minutes.

There are the representative offices of car rental companies in Rome itself. However, this variant will be suitable for those who have chosen Rome as their main ‘travel dish’ and saved driving along the outskirts and other Italian cities for last.

In the Eternal city, it is possible to find a car of any class. Cars are represented by the Italian brand Fiat as well as by other brands inclusive of Mercedec-Benz, the most luxurious one. The prices are different. They depend on the class of the car, rental term and other conditions. Such companies as Firefly, Avis, Budget, Goldcar, Green Motion, Hertz, InterRent, Maggiore, Sicily By Car, Sixt, Smile Rent and Thrifty are represented in Rome.

The rental cost includes the standard package of requirements. In special cases, the sum can be increased. Additional paragraphs, which can be stipulated in the agreement, are another driver, the necessity to install additional equipment and child seats as well as many other paragraphs. In order to get a car, you need to have not only a Russian driving license but also the international one.

Road traffic regulations and their observance in Rome

Traffic in the Eternal city is very difficult. However, the observation of road traffic regulations is the real guarantee that you will not get a fine receipt at the end of your trip. As a rule, the Italians drive emotionally since this is one of the peculiarities of their character. Expressive and rude in many respects, they do not bear drivers who do not know where to go and where to turn. You ought to rent an in-car navigation system. This will significantly simplify your driving in Rome.

The main regulations you are not recommended to violate:

All abovementioned violations as well as the failure to observe the road marking, driving in forbidden places and other offences can result in a fine. Fines are quite significant in Italy. There is one more point. You shouldn’t try agreeing with the representatives of the Roman police and exciting pity. It won’t work. It will conversely cause much more severe consequences.

Insurance packages and a franchise

Travelers with car rental experience in different countries advise to try spending money on the insurance package which does not contain a franchise. The so called zero franchise will prevent you from numerous problems. It is known that even the most careful driver feels stress when driving on Roman roads. Concerning parking in the Eternal city, legends go about this procedure. Marred face bar and mirrors are considered to be normal. You have nothing to endure in such a situation. However, in the event there is a franchise which can be from 800 till 1500 Euro, you can pay much more than you initially planned.

As a rule, there are three types of insurance which apply to a particular rental car:

Fuel and its cost

The price for fuel 95 and fuel 98 in Italy is perhaps the highest one in Europe. You can complain as much as you wish, but it is better to go along Rome and the whole country by car. On average, you will need to pay 16.7 Euro for 10 liters of fuel 95 and from 18.5 till 18.7 Euro for 10 liters of fuel 98. Diesel fuel is a little bit more profitable than petroleum fuel. 10 liters will cost your approximately from 15.5 Euro till 15.7 Euro. However, the rental cost of a diesel car is always a bit higher than the rental cost of a fuel one.

It is very difficult to park a car in Rome, especially if you want to do it at a particular place comfortable for you. It is much easier to leave the car at one of the large parking lots located on the outskirts of the city and travel along Rome by public transport. The public transport entirety corresponds to the European standards by such criteria as cleanness and convenience. The transport goes strictly according to the schedule. This allows accurately planning your trips.

In Rome, it is customary to divide parking spaces by the road marking color:

The car park payment is made by purchasing a special ticket. There is always a parking meter at the parking space, the instructions on which are written in Italian and English. Parking meters usually accept only coins. This is why you should suit yourself with them beforehand.

Many travelers try to visit not only Italy and Rome but also other European countries after receiving the Schengen visa. As a rule, care hire companies allow visiting other Western European countries in rental cars. However, going to Eastern European in leased vehicles is forbidden. If you wish to travel to many countries, you should read all useful information and ask a company all necessary questions concerning the opportunity of crossing the Italian border.