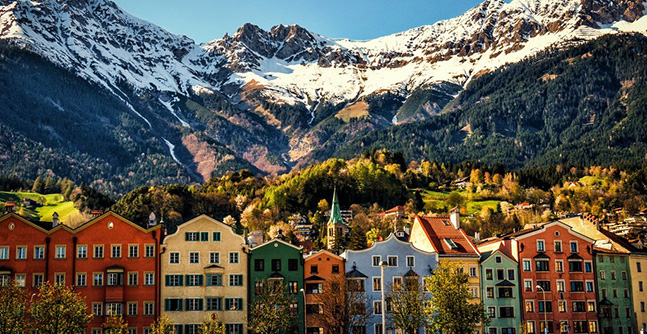 Read this section to get a piece of advice on car rental in Innsbruck. Driving around this wonderful city will bring you a lot of pleasure.

Innsbruck is one of the most beautiful Austrian cities. That is why it is not surprising why many travelers try starting their travel around Austria just from Vienna. A good chance to see everything you have planned without depending on the guide and tourist group is to hire a car and compile your own route. At that here you have a chance to look for a cheap variant and rent an economy class car. It is also possible to achieve your dream with a luxury class car or sport-utility vehicle.

This city is traditionally called the concentration of myths, legends and castles. Innsbruck is ready to meet guests at any time of the year. It offers excellent opportunities for having a rest in winter. In summer, you can make cycle rides, see the sights and get pleasure from Tyrolean cuisine. Hiring a car at the airport is a wonderful idea. You can put your clothes into the baggage hold and take to the road.

In order to get a car, you need to have the international driving license and bank card on which a particular some of money will be frozen as a deposit for the car. The sum will be unfrozen after you return the car in case no damage has been caused to the car and third parties and you haven’t committed any road traffic offence. The age limit for the driver is 21 years old. However, many companies require the driver to be at least 25. It is also important for the driver to have at least 12 months’ driving experience.

There is a demand for convertible automobiles. They allow fully enjoying the mountain landscapes and steeple-roofed broach spires of castles as well as taking wonderful photos without leaving the car. In winter, a demand for sport-utility vehicles and cars with special baggage holds traditionally grows.

Despite its location, the city is surrounded by the mountain groups. Innsbruck offers excellent roads driving on which is only a pleasure. The only problem lies in the fact that you are not advised to drive as quickly as the wind since the fines for speed infringement can really be a killjoy and drain your purse. Another important issue is blood alcohol level. The following significant fines are given for drunken driving:

The speed limitation is standard. It is possible to speed up to 50 km/h in the city. You are not allowed to drive a car with the speed of more than 100 km/h outside the city. The maximum speed allowed on highways can be 130 km/h. The road signs are installed everywhere. As a result, you will learn about the change of the speed limitation beforehand.

You should also remember that in Innsbruck, like in other European cities, both the driver and the passengers are obliged to fasten the safety belts. It is also strictly forbidden to drive children without child seats corresponding to their height and weight.

Important! Talking on the mobile phone without a hands-free device can result in a fine equal to 35 Euro.

As a rule, the standard insurance packages from car theft and from possible damage caused to third parties are included in the rental cost. However, many travelers prefer to foresee all possible contingencies and purchase a full insurance package with a zero franchise.

The standard insurance packages are the following:

Rental cars in Innsbruck must be filled with one of the following types of fuel:

There are enough fuel stations both in the city and on the surrounding highways. At that the price level is practically the same. However, when choosing a fuel station, you had better be guided by such characteristics as the convenience of entrance and availability of a café or restaurant.

The following car parks are popular in this city:

When travelling by car, you should learn whether the hotel you are going to stay at has its own parking space beforehand. Many hotels provide such a service for free. But there are such hotels which increase the cost of living by from 5 till 20 Euro per day just for providing the opportunity to park a car near the hotel.