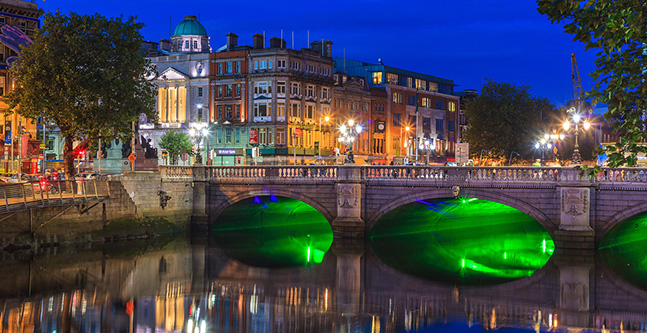 Dublin – it is now the heart of Ireland and most visited town on the island. Thousands of tourists come here hoping to take a break from London respectability glitz and pretentiousness and enjoy the wonderful life filled with all sorts of shades of green! Dublin will not disappoint you – energy capital charges guests only positive emotions.

Perhaps in the city you will not be very convenient to use the car, but to explore the area of ​​Dublin and Ireland itself better on its own four wheels. We definitely recommend taking a car at the airport and upon arrival to the city to go to a meeting adventure!

The parking area at the airport is located directly next to the exit of the terminals. To the office of your company can be reached by free shuttle. In order to get the car out, you need a driver's license of international standard and a bank card. You want to save? In this case, book your car in just a few weeks before the trip – is the surest way to protect yourself and your fellow travelers by force majeure on arrival. In Dublin, working offices of the following companies:

To get the keys to the rental car, present in the office of your company's e-voucher, which gets each client booked cars. Be sure to read the lease agreement: attention should be paid to the fuel policy (mainly – is receipt and delivery with a full tank), restrictions on the distance covered (without limitation), restrictions on leaving the country (individually, extra fee) and so on.

Rent a car in Dublin: prices

Ironically, the high demand in Dublin used trucks and SUVs. Probably, such a trend has developed because of trips out of the city and in rural areas and remote villages, where tourists want to get well, roads are not the best quality. The lowest cost of renting a car three days – a subcompact. In the same range you can take economical city car, which is suitable for couples and small groups of friends who came to rest.

You can save on rent by means of pre-booking (as we have already mentioned above), as well as through promotional offers rental companies. Promotional offers are formed, for example, before the weekend: you can get a discount if you take the car on Friday and did not return after the prescribed hours of Monday morning.

Do not forget to equip child car seats if you are traveling with passengers under 12 years old. Chairs to the weight and size of the child. The price does not include rental and lease navigation systems, driver services, sports racks and so on.

The speed is limited: how to ride in Dublin

Watch out for signs – some road sections of the individual speed limits. For exceeding a fine of 80 euros.

It is important not to forget that in Ireland (including Dublin) are toll tunnels and bridges:

As well as the two toll highways are in Dublin:

You can pay the fare by credit card or in cash, if the bands are automatic terminals or "live" operator. Perhaps you will pass and a toll road on which there is no reception points and cash cards. In this case, up to eight o'clock in the evening of the day following the directions to pay "ticket" on the Internet, calls to special service number or machine Payzone, in the corresponding stores. More information about payment of roads in Dublin you can provide the rental company.

Refusal of payment for tunnels, bridges, roads subject to a fine of up to 1270 euros.

The laws of Ireland, on the road, differ only in the fact that any breach of the driver is not only obliged to pay a monetary penalty, but also charge a fixed amount of "penalties". Such points "piling up" on the driver's license. For foreigners created a separate database, which make information about abuse and their total score.

Paying fines advise immediately – after 28 days, the amount is automatically increased by 50%. If the offender for any reason, and missed a second chance (another 28 days), the case is referred to court. A confession of guilt of the driver in court facing increasing amount of the fine to tenfold.

Traffic violations in Dublin are very similar to ours, and the amount of the fines – not at all:

To the latter point is particularly talking on a cell phone (even with the use of the device "hands-free").

Important! Do not forget that in Dublin, as well as on the entire territory of Ireland, vehicles moving on the left side. For violation of the direction of motion of a penalty of 60 euros.

To insure or not: that is the question

Insurance rental cars – a serious matter. We advise you to give it special attention for the simple reason that after the signing of the contract, all costs associated with possible damage to the machine, fall on your shoulders.

Ireland has mandatory auto insurance Motor Insurance, which resembles our insurance. Optionally, you can take an extra insurance package, and protect themselves from trouble in case of theft, accident, vandalism, acts of natural disasters and other unpleasant incidents.

Refuel in Dublin and take the fuel with a

In Dublin, there is enough of a variety of gas stations, but on a trip to remote areas of the country suggest to take with a canister of fuel in reserve.

Fuel cost Dublin is in the following range:

Parking in the center of Dublin

The center of Ireland's capital is divided into several "color" parking areas, the cost of space depends on which part of the city:

It operates a simple rule: the closer to the center – the more expensive. But where to look for a cheaper parking lot? We will tell! At a short distance from the historic part of Dublin city located car parks company DUBLIN Q-PARK CLERYS, leave the car in the territory of which it is possible for just 8 euros per day. Until the city's main attractions you can easily reach on foot or reached by public transport.

Pay parking can be a bank card, cash or by telephone. Mobile service will cost you 0.5 euro / month for each registered vehicle, and 0.2 euros for a warning message (a reminder of the end of the term of the paid parking).

Leaving the car in the wrong place, you risk getting a notice of a fine of 80 euros and even a lock of motion ("shoe"), which will be removed for the same amount.