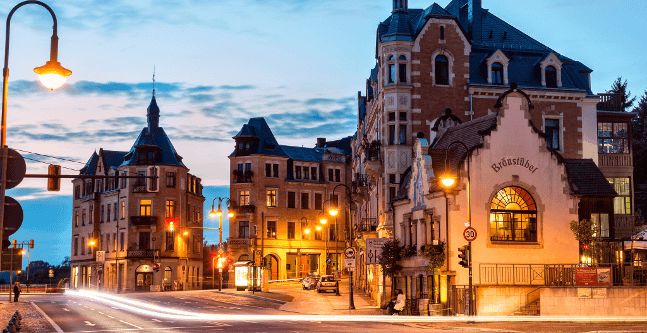 Germany is an amazing country whose roads are considered nearly the best in Europe. At that German roads are free, which gladdens tourists very much. It is also possible to travel around the country by train, by bus or even by plane. Internal flights are widely developed and extremely popular. However, this all cannot be compared with planning the route and travelling on your own. In order to see all the sights it is necessary to have a car.

It is possible to hire a car in Germany at many different places such as:

Commonly known information about the country:

The peculiarities of car rental in Germany

It is necessary to mention the following peculiarities of car rental in Germany:

The average cost of rental cars in Germany

In Germany, it is possible to hire any type of car such as a small low-maintenance and economy car or a luxurious Mercedes or BMW. Please, take it into account when you are going to this country. As it is said in Russia, tastes differ. That is why we offer to get acquainted with the average prices for all types of cars:

Besides the categories mentioned above, it is easy to rent a convertible automobile which will let you enjoy your summer trip. Other categories of cars are also offered for rent. The choice of cars is extremely individualized. The manual and automatic transmission, fuel and diesel engine, the availability of integral GPS and many other parameters allow turning your trip around the country into a real fairytale.

Traffic in Germany is traditional, and the traffic regulations are rather strict. Some of them say the following:

In 2008, a special regulation limiting traffic in the so called ecological zones was brought into effect. The road sign with the inscription ‘Umweltzone’ is a restrictive sign. Only cars which have a special sticker on the windscreen can go further. This sticker confirms that their drivers have received a special permission to drive through ecological zones. There are also paid road sections such as the Warnowtunnel and Herrentunnel tunnels as well as the panoramic road Roßfeldpanoramastraße. The payment for driving through these sections is not high. On average, the cost is from 1.5 till 5 Euro per car.

Three following insurance packages are obligatory to be formed when hiring a car:

The packages can be both with a franchise which usually makes up from 800 till 1500 Euro and with a zero franchise. The second variant is more profitable since you do not have to worry about anything if the insurance event occurs. On the other hand, in such a case you will have to pay a higher insurance premium. In most cases, tires and windscreens are not included in the franchise. This means that the customer will have to repair them on his own.

The main peculiarity of cooperation with our company lies in the opportunity to form an additional insurance policy. Booking a rental car at our company, you can form a special Travelocars insurance package and get rid of any possible troubles. This is because we will compensate all the damage if the insurance event occurs.

How and where to fill a car in Germany

There are many large and small fuel stations in Germany. The quality of fuel is excellent and the prices are average by European standards. For tourists’ convenience, the fuel stations are situated directly in cities. Shops are located near the stations. These shops will be extremely useful to you when supermarkets are closed. On expressways, the fuel stations are often combined with special hotel complexes where it is possible to eat, have a rest, take a shower and etc.

The German fill their cars with lead-free fuel as well as with diesel fuel. There are also modern filling stations which sell bio fuel. However, in order to visit these stations you need to hire a car which uses bio fuel and the rental cost is much higher in this case. It is also necessary to point out that diesel fuel is cheaper than fuel 95 and fuel 98. Nevertheless, renting a diesel car is a little bit more expensive than renting a fuel one.

The averages prices for fuel are the following:

Concerning parking, everything is extremely strict in Germany. You can park your car only at the car parks. Thankfully, there are enough of them in German cities. Free car parks can be found on the territories of large molls and shopping centers. Almost all car parks have parking lots earmarked for as many cars as the number of visitors can be.

There are some peculiarities. The road sign with an inscription Anwohnerparken or Anliegerfrei says that only local inhabitants are allowed to park their cars at this place. In order to fulfill the parking regulations, it is necessary to have a special parking disc in the car. This disc allows pointing out the parking time. It is necessary to determine the parking time on your own at car parks where tickets are sold by parking meters. You must enter the corresponding combination of buttons and insert the money in the meter. In most cases, parking meters accept only coins.

The following fines are given for illegal parking: