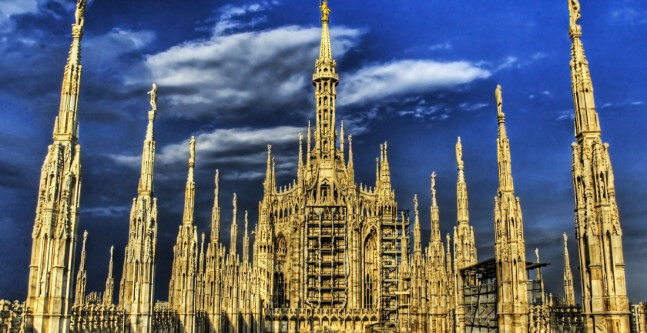 Peculiarities of car rental in Milan

There is useful information on car rental in Milan, one of the acknowledged European fashion capitals. Driving a car in Milan has its own distinctive features.

Milan is one of Italian tourist centers. This city is like a magnet for travelers. A modern man does not want to depend on a travel agency. That is why everybody looks for an opportunity to move around the city on his own rather than hire a car and finds nothing. So, how is it possible to make a rental car your guide into the world of Italian beauties?

The simplest and cheapest variant is to hire a car directly at the Malpensa airport after arriving in Milan. World famous international, European and Italian care hire agencies which rent out cars of all classes are widely represented at this airport. You can find such companies as:

The representative offices of care hire companies are also located in Milan itself. However, you will have to reach Milan by taxi if you wish to rent a car there. Such a variant is good for travelers who plan to spend a few days in Milano and after this travel along the whole country.

How much does car rental in Milan approximately cost?

The cost of car rental will not only depend on the class of the car but also on the rental term. It appears that the higher the term is, the lower the price is providing the cost of one day is taken as a basis. There are approximate calculations of the rental cost of cars of different classes:

The rental cost most often includes:

The payments for in-car navigation systems, child seats and bike fixtures are not included in the standard payment.

As a rule, the age threshold at Milanese car hire agencies is limited. If only the driver is older than 20 years old, he can hire a car. In order to form a rental agreement, you need a standard package of documents. You ought to read the agreement carefully inclusive of the paragraphs written in small print. After this, you can sign this agreement.

Like in all other cities, the maximum allowed driving speed in Milan is 50 km/h. Otherwise, you will be fined. The speed outside the city cannot exceed 90 km/h. You can make 110 km/h and 130 km/h on highways and expressways respectively. Another widespread limitation is the zones which the entrance is limited to. As a rule, these zones are located in the historical center of the city. That is why you will have to find a car park, leave your car here and further see the Milanese sights travelling on foot.

Important! If the hotel you have chosen is located in the so called closed zone, do not forget to solve this issue at the reception beforehand. You should inform the data about the car and get a pass. Otherwise, every arrival at the hotel will cost you money.

Fines and their amounts

One of the most widespread problem travelers can face up with in Milan, is the general non-observation. There are also characteristics features peculiar to this city in particular. The most widespread fines are for:

Which insurance to choose

Like in other cities, it is rather difficult to drive a car in Milan. If you do not know the peculiarities and driving style of local population, it is extremely difficult to return a rental car without at least slight damage. Many experienced travelers prefer insurance packages with a zero franchise. This guarantees that you will not have to pay for auto repair.

What is better, petroleum fuel or diesel fuel? Where can you fill a car?

Diesel cars are popular in Europe. They are more fuel-efficient and have some other advantages. However, it does not mean that petroleum fuel cars are somehow worse than diesel ones. Having chosen a car and received it with a full tank learn which fuel you need to fill this car with. The following types of fuel are popular in Italy:

There are no problems with filling stations both in Milan and in its neighborhood. You should remember that city stations can close at night. At the same time, the stations on highways work 24 hours per day. Expensive diesel fuel will cost you 1.56 Euro per liter. One liter of fuel 95 costs 1.67 Euro. One liter of fuel 98 costs 1.86 Euro.

Where to park a car

Travelers can have problems with parking a rental car. Milan is no different from other Italian cities. It is very difficult to find a parking space here. You should use a subway if it is comfortable for you and leave your car at a large parking lot on the outskirts of the city. However, you ought to know:

Parking tickets can be purchased at usual news stalls. The cost of one hour varies from 1.2 till 2 Euro. You also should not disregard large parking spaces located in different parts of the city. The rates at these parking spaces usually depend on the time within which the car is parked.