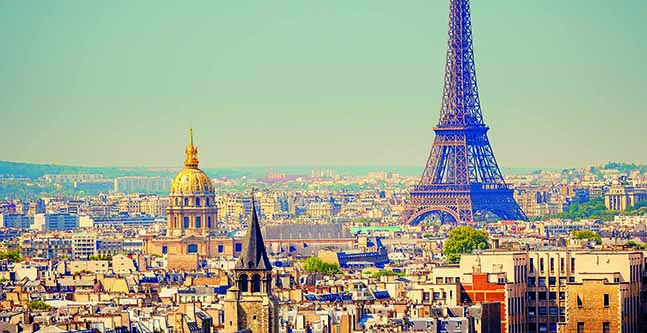 This section will let you learn useful information about the peculiarities of renting cars in Paris, one of the most popular tourist destinations. Nothing can be better than driving around this wonderful city.

Oh, Paris! This is a dream of all the amorous, an ideal city for travelers and a magnet for fashion mongers. Coming here and using a rental car means seeing the city which is extremely different from the one represented on postcards and booklets. The most comfortable variant is to hire a car at one of the Paris airports. This is simpler and cheaper than doing it somewhere else. This also allows dipping yourself into the hectic life of the French capital.

The Airport Roissy-Charles de Gaulle is not only the largest French airport bit also one of the most popular gateways all over the world. It is located within 25 kilometers away from the city. It accepts a large number of flights every day. The airport has 8 terminals some of which have a few lounges. This makes an impression of a small city with its own roads, transport, coffee houses, sitting areas and shops. Hiring a car right at one of the terminals, you can go around the world-famous Elysian Fields just in a half an hour. Another variant lies in reaching the city by commuter train or bus. You can stay at a hotel and hire a car next day. Everything depends on the plans and wishes of travelers and the budget earmarked for car rental.

The second largest French airport is the Orly airport. This airport accepts the internal and European flights. It is in lower demand among the Russian tourists. If necessary, it is also possible to hire a car at this airport since the international and national companies have their counters here as well. Everything is done for the travelers’ convenience. The Orly airport has the south and north terminals. You can reach the city only by special commuter bus.

Another airport you can come in order to visit Paris is the Beauvais Tille airport. This airport is the most remote gateway from the city. However, it accepts the flights arranged by low-cost airline companies, i.e. inexpensive flights. The airport is located 85 km far from the French capital. That is why after coming here, it is worth hiring a car on site and not going to Paris using public transport.

Only a driver, who is older than 21 years old, can hire a car in Paris. However, you will have to pay the so called ‘young driver charge’ if you are younger than 25 years old. There are also limitations for young drivers connected with the class of the car. You will not manage to rent a luxury class car if you are younger than 21. Concerning such classes as Mini, Economy and Standard, they are available for everybody.

In order to conclude a rental agreement, you need to have the international driving license and credit card on which a definite sum will be blocked as a deposit. After the car is returned to the company, the sum will be available again if no damage has been caused to the car.

Paris is considered to be one of the most expensive cities. At that the rental cost of cars depends not only on the season. Summer is the peak of tourist activity. On the other hand, many travelers visit Paris in winter, in particular, on the 14th of February. The cost of car hire for 3 and for 7 days depends on the class of the chosen car:

The price can be increased at the cost of:

Road traffic regulations and the most widespread fines

Traffic in Paris is very difficult and it is clear. In addition to the fact that the city itself is large, crowds of travelers who go by cars or sightseeing buses slow the traffic down. The road traffic regulations coincide with the general French regulations as well as with the European ones. Therefore, experienced travelers will not have difficulties to adapt to them. There are some of the main regulations:

The fines in Paris and in France on the whole are rather high. They can be from 19 till 4500 Euro. The largest fines are given for driving through the red light, speed infringement, drunken driving and etc. Despite the fact that the blood alcohol level of up to 0.5% is allowed, you had better not drink alcohol at all.

The rental cost of the car hired at the airport of Paris already includes all standard insurance packages. However we recommend you to form an insurance package with a zero franchise. Such a service can be obtained at our company or on site in the process of forming a car. Of course, the full insurance package costs higher than the one with a 500 or 1500 franchise. However, you will manage to feel a lot calmer in the streets in this case.

Fuel and car parks in the capital of France

There are several types of car parks in Paris:

Important! You cannot pay the car park in cash irrespective of whether you have banknotes or coins. Only a special card ParisCarte is accepted for payment.

There are both large and small fuel stations in Paris. The fuel ranges in price but just as little bit. If you have such an opportunity, you should consult the receptionist at your hotel on the question of where to fill the car with fuel. You should also remember about the fact that you will have to return the rental car to the company with the full oil or diesel fuel tank.