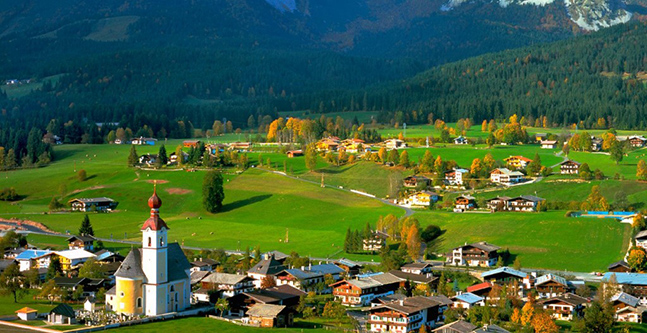 Austria is a country you can visit at any time of the year. In summer, fascinating cities with their sights are waiting for you here. In winter, you can enjoy the mountain slopes with their unique tracks. If you wish to open the country from a new angle, a good decision is to come to Austria by plane and hire a car.

Vienna and Salzburg, Graz and Klagenfurt, all of these cities are worth visiting. You can compile any route according to your preferences after renting a car at the airport or at every large or small city. A trip in a car is a fantastic travel within the course of which it is possible to stop and have lunch, walk along the mountains and plains and take unique photos. Car rental is ‘autovermietung’ in German. You had better start looking for a car and forming it within two or more months before the start of the trip.

The average cost of a C class car with an insurance policy and in-car navigation system in Austria is from 70 till 90 Euro per day. Car rental in this country is considered to be more expensive than in the neighboring Germany.

If your family is small and the size of the car is of no importance, you ought to choose the mini or economy class car. This allows not spending very much money. At that the level of convenience will be excellent thanks to the high quality of the country’s roads. It is also important to know that you can often receive a car of a higher class than you wished. This is because the most popular cars are in great demand in the peak tourist season, especially in winter.

In order to receive the car, you need to have the international driving license and a credit card. The age of the driver shall be not lower than 21 years old. However, there are exceptions which require the car renter to be at least 25. The rental cost includes unlimited mileage, all road taxes, airport charges and VAT. There is also a deposit which is frozen on the car renter’s credit card.

The following companies work in Austria and rent out cars:

Average prices for different classes of cars in Austria

Since Austria is a European country, the road traffic regulations here are similar to the ones in force in France, Germany and other representatives of the Eurozone. All signs on roads are perfectly readable. It is practically impossible to lose your way in the country. There are the following general rules:

The following speed limitations are in force in European Austria:

Having rented a car in Austria, the driver shall check the availability of the high-visibility vest, fire extinguisher cylinder and first aid kit. It is also necessary to have a full-size spare wheel and additional winter equipment (chains and etc.)

Important! It is forbidden to use an auto-alarm in cities and other population centers. It is also not recommended to install a radar detection device.

It is necessary to point out an interesting fact among the peculiarities of driving a car in Austria. It is forbidden to overtake a school bus which is standing at the bus stop with the turned on direction lights.

The sums of fines differ depending on the land in Austria. Like in other European countries, it is sometimes possible to pay the fine given by the policeman on site. The policeman is entitled to provide you with a citation. Such a way of payment is profitable since a discount is provided for the driver.

The following fines are in force:

There are a sufficient number of paid roads in the country. The payment sum for driving through them depends on the kilometer performance, season and the number of days in the car. A vignette for driving on the toll roads can last from 10 days.

Insurance of a rental car

When forming a car rental agreement in Austria, it is necessary to pay attention to the insurance policies which are offered to the driver:

Any insurance with a franchise means that you risk bearing additional expenditures. Many travelers prefer to form a full insurance package which stipulates a zero franchise. This is a clever decision. The insurance premium will not be too high, and calm will be guaranteed both to the driver and to the passengers.

Fuel and fuel stations in Austria

Cars which are rented out in Austria are filled with fuel 95, fuel 98 and diesel fuel. Diesel cars are considered more economy and have other characteristics which are often better than the ones of oil fuel cars. However, everybody will choose a car for himself depending on his own preferences and driving experience.

Leaded motor gasoline is not sold at the country’s fuel stations. It is possible to purchase only unleaded fuel. The quality of fuel is the highest. The average prices are the following:

Parking a car in Austrian cities

Parking boxes and the so called surface and underground car parks in this country allow every traveler to choose the most convenient variant. Widespread car parks are the parking lots called ‘ParkundRide’ which are marked on the road signs or maps as P+R. The price of one parking day at these car parks makes up 3 Euro. Other car parks called ‘Kurzparkzone’ cost more expensive. Their cost depends on the parking time:

It is a rather difficult task to find a place at Vienna or Salzburg car parks. First of all, you never know whether there will be a vacant place or not. That is why travelers often circulate a few times in order to find a parking place. Secondly, in order to park a car at the city car park, it is necessary to buy the parking ticket called ‘Parkschein’ beforehand. Only this ticket will be accepted by the parking meter.

In Austria, it is allowed to leave your car park for free for some time which is usually pointed out on the parking sign. Parking a car for free within 10-15 minutes is not a problem. However, a special disc with an indication of time shall be put under the windscreen. If you have no disc, write the time on a piece of paper. This is enough.