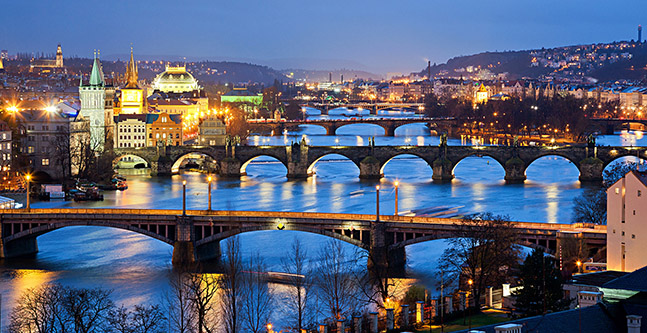 Prices for rental cars in Prague in the last 7 days:

Rent a car in Prague – a great idea for a pleasant stay, not only within the city, but all over the Czech Republic as well as in neighboring countries! Rules of the majority of Czech landlords vehicles provided permission to travel to other countries, without leaving the European Union. It is important to specify a list of countries you plan to visit.

When you arrive in an unfamiliar airport, the last thing I want to spend time looking for office rental cars! We recommend choosing a company representative which is located directly at the terminal and provide an opportunity to go directly from the airport to the selected machine:

Terms of renting a car in Prague are written in the contract that you will be asked to sign before receiving the keys to the car. To obtain all the documents you will need the original passport and driver's license (international model). Some companies also freeze on your credit card deposit of between 200 and 500 euros. Become the proud owner of a car for a few days in Prague are all owners of the above documents have reached the age of eighteen.

The cost of renting a car at the airport in Prague

Prices for rental four-Prague is not too different from the same period in other cities of the Czech Republic. While vacationing in the capital, we advise to pay attention to the mini class cars, because they are cheaper, and parking places there anymore. The final choice depends on your needs, as daily rental cars are in demand among businessmen coming to Prague for business (class standard and deluxe), and among families with children (generalists and economy cars), and traveling groups of friends (vans), and fans of extreme sports (SUVs).

To save on car rental in Prague, you can book it in advance. Early booking advisable anyway and is a must if your trip is planned for high tourist season, which lasts in the Czech capital from July to September.

At the entrance to Prague vehicle speed decreases dramatically. Restrictions are a precautionary measure, as in the city a lot of cyclists and public transport. For the latter, during peak hours even provided with separate strips with marking BUS, TRAM, TAXI. Moreover, the speed 50km / h to avoid severe noise contamination. With the same purpose in the heart of the capital is strictly prohibited beeping (from 9:00 to 17:00 in summer and from 8:00 to 18:00 in winter).

On the territory of Prague in many places signs placed on the control of speed and it is not just "horror stories" for the careless drivers – your speed can actually be measured at any time! Local road users are very scrupulous observance of speed limits, and we advise you to do.

The right to control the driver's actions are in Prague Czech Republic, police officers as well as police and customs settlements.

Within the city can check the speed only within the appropriate sign, but as we know and "stick and annual shoots," therefore it is advisable to stick to the permitted norms everywhere. Speeding is the most frequent violation. Deviations from the PDD in Prague provided a pretty solid fines:

In the capital of the Czech Republic there are two new rules to us:

As a rule, cars are rented in Prague already insured. But it is not out of place to learn about what you are paying the money.

Two mandatory package is already included in the rent, but there is another type of insurance – optional. It is available on request. This service is useful if you have valuable luggage or you do not feel very confident in the way – round the clock call-center will help find a way out of any situation.

Prices for fuel and refueling in Prague

Gas stations in Prague, located on the outskirts. Here you can fill with unleaded petrol 95 and 98, as well as diesel, known in the Czech Republic nafta. The cost of fuel can vary slightly depending on the locality and the gas station, but on average, you will see the following prices:

Although within the Czech capital has a lot of variety of dressings, not to worry, you can reserve to keep in the trunk of a canister with ten liters of fuel – this is the number of gasoline or diesel officially be stored in the car.

Prague: where to park and how much it costs

The basic rules are the same for parking all localities of the Czech Republic and Prague is no exception:

Some areas of Prague are also divided on the special parking area (the map can be taken in the hotel or downloaded from the Internet). Zones of different value, time of day, duration of parking and a list of road users who are allowed to leave the vehicles in these locations:

In view of numerous complaints to the work of the blue zones have been amended and now everyone can buy a ten-card with the right to park in the blue zone for 15 euros. Pay for parking in any area is possible by means of the parking machine that only accepts coins 1, 2, 5, 10, 20 and 50 kronor.